The Ten Kings who reigned for one hour

The first hour described in the Book of Revelation is the reign of Ten Kings with the beast.

They receive authority as Kings with the Beast as for one hour.

The beast was the “little horn” came up among ten horns in the Book of Daniel. His appearance was described as “different than the first ones” (Daniel 7:24). In Chapter 8, the little horn “exalted himself as high as the Captain of the Armies,” as high as Christ.

The ten horns in Daniel Chapter 7, came out of an exceedingly dreadful beast, which we know to be Rome. In verse 24, we are told that “the Ten horns are Ten kings who shall arise from this kingdom.”

Of course, more than Ten Kingdoms came out of the Roman Empire, but the identity of these Ten Kings is clear from John’s statement, “they receive authority as Kings with the beast as for one hour.”

An hour in the Book of Revelation is understood as about 500 years, 1/12 of the human clock of 6,000 years.  After the East-West Schism of 1054, only Ten States remained with the Pope. This included the Bohemians, in the North-West part of Hungary, who first broke free from the Papacy in 1471. But the actual political power of Rome with these States did not come to an end until the 16th Century. 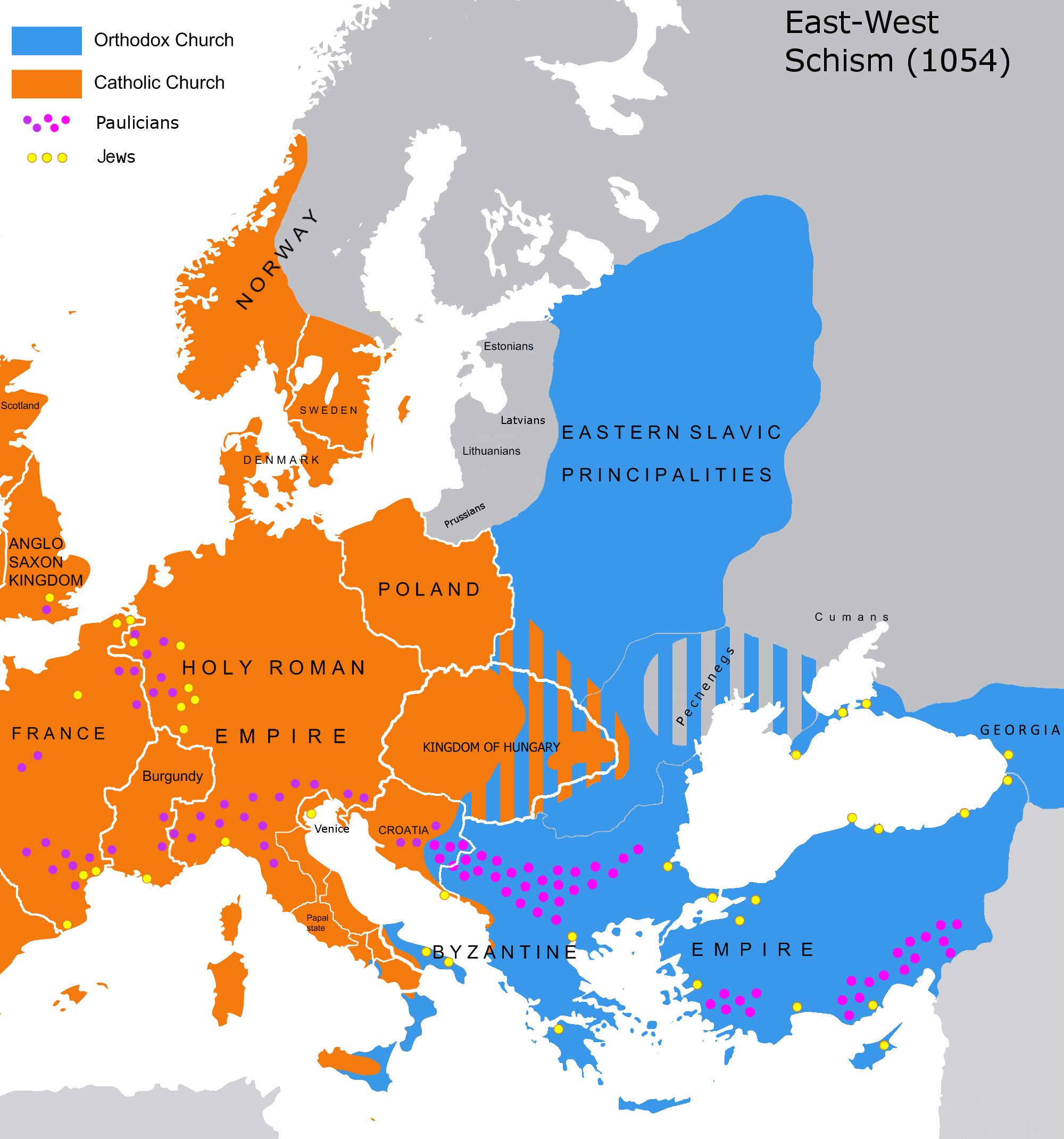 The War with the Lamb

Before the Reformation, the Ten Kings of Western Europe oppressed the saints, through their relationship with the Pope. They not only oppressed those who opposed the Pope, they killed them.

John said, “these (Ten Kings) have one purpose, and they give their authority and power to the beast” (Revelation 17:13).

John said, “these (Ten Kings) will make war with the Lamb and the Lamb will overcome them, because He is Lord of lords and King of Kings, and those who are with Him, called chosen and faithful” (Revelation 17:14).

Daniel said the power of Satan, “shall be broken without humans means” (Daniel 8:25). He described this in a Chapter Two. The Spirit of Christ was the stone that was cut out of the mountain, “without human hands.” It smashed the Ten Toes of the Image in Nebuchadnezzar’s dream (Daniel 2:34).

This was the stone described by Isaiah, “Behold, I lay in Zion, a stone for a foundation, a tried stone, a precious cornerstone” (Isaiah 28:16).

The victory of the Spirit of Christ came by the testimony of the Two Witnesses, the two Olive trees described in the Book of Zechariah. Zechariah said they overcame, “not by might nor by power, but by My Spirit” (Zechariah 4:6). Here, the Targumist translated “by My Spirit” as “by My Word,” to describe Christ as the Word.

In Revelation Chapter 11, the Apostle John described the Two Witnesses who testify against the beast. The Greek text literally says, “I will give Two Witnesses of Me, and they will prophesy for 1,260 days” (Revelation 11:3). Verse 4 tells us that these Two Witnesses are the two olive trees from Zechariah 4; they are also called two lampstands, two Churches (Revelation 1:20).

Of course, there were many more than two witnesses over these 1260 years. But Jesus said that the Law only required two witnesses (Matthew 18:16; 2 Corinthians 12:14).

From the Book of Daniel, we understand the Two Witnesses as Jan Huss and Martin Luther.

In 1471, the “Hussites” became the first saints to break free from the power of the Beast. This ended the “time, times and half a time,” in the hand of the Antichrist, which Daniel called 43 months of 30 days, on the Jewish lunar calendar.

Both Jan Huss and Martin Luther understood that they were the Two Witnesses.

When Jan Huss was burned at the stake, he said to his executioner, “Today you burn a goose, but in one hundred years a swan will arise which you will prove unable to boil or roast.”

Martin Luther saw himself as the fulfillment of that prophecy. In his famous trial at the Diet of Worms, he said, “I am a Hussite.” Today, the pulpits of Lutheran churches are often in the shape of a swan, to remember this prophecy by Jan Huss.

The Preaching of the Two Witnesses

John said, “fire flows out of their mouth and devours their enemies; so if anyone wants to harm them they must be killed in this way.” This fire was the word of God (Jeremiah 23:29).

They “have the power to shut up the sky in the days of their prophesying.” Like, Elijah who prayed that it would not rain. After 3 ½ years, he prayed again, and rain once again watered the earth. The Spirit of Christ was the rain that was poured out by the Two Witnesses, after 3 ½ years or 1278 days, as years.

These two witnesses freed the saints from “the Great City mystically called Egypt” (Revelation 11:8), just like Moses and Aaron, who delivered the Israelites from Egypt. The first plague of Moses and Aaron was to turn water into blood.

The Two Witnesses also have “the power to turn the waters into blood” (Revelation 11:6). But the meaning is spiritual. The water and the “sea” represent salvation, baptism, throughout the Book of Revelation. Blood in the sea represents the spiritual death of those who are baptized in the kingdom of the beast. In the second bowl of wrath, the Angel poured his bowl into the sea, and it became blood, and every living thing died (Revelation 16:3).

John said the Two Witnesses, “have the power to strike the earth with a plague.” John describes the “earth” as the people of the world throughout Revelation (eg. Revelation 12:16), and he calls the saints, those who dwell in heaven.

The Death of the Two Witnesses

John said “when (the Two Witnesses) have finished their testimony, the Beast that came up from the Abyss will make war with them and overcome them and kill them” (Revelation 11:7).

After Jan Huss was burned at the stake in 1415, all of Bohemia was outraged, and an army of “Hussites” continued his testimony.

In 1467, a devout group of Hussites, called the “Unity of the Brethren,” gathered the courage to declare separation from the Catholic Church, and selected three brothers as the ministers of their Church.

But fearing the common people would not accept them, without proper “apostolic authority,” the Brethren approached Bishop Stephan, of the Waldenesian sect. The Waldenesians believed his succession as a bishop traced back to the Apostles themselves.

John said the Two Witnesses would be killed in the view of all, and “those from the peoples and tribes and tongues and nations will look at their dead bodies for three and a half days” (Revelation 11:9).

After Bishop Stephan ordained the new ministers, he fell into the hands of the Catholic authorities. He was burned at the stake in Vienna, on August 19, 1467, or shortly thereafter. The Moravian brethren were scattered and hunted like deer in the forest of Bohemia.

This was three and a half days, or years, after the death of Bishop Stephan.

This ended the “time, times and half a time,” in the hand of the Beast. This was three and half years, 1278 days, as 1278 years from the time that the Bishop of Rome exalted himself as high as Christ.