The Shepherd of Hermas, written between 85 and 145 A.D., explained that Jesus Christ was the Spirit of God, who was sent out in the beginning of creation: “The pre-existent Holy Spirit, which created the whole creation, God made to dwell in flesh that He desired” (Parable 5:6[5]).

Explaining Luke 1:35, Justin Martyr, in 150 A.D., wrote, “It is wrong, therefore, to understand the Spirit and the power of God as anything else than the Word, who is also the first-born of God.” 1

In discussing “Pre-Nicene Theology,” in his Book Early Christian Doctrines” the Trinitarian theologian J.N.D. Kelly said, “the all but unanimous exegetical tradition of Luke 1:35 equated ‘the Holy Spirit’ and ‘the power of the Most High’ . . . to Christ Who, pre-existing as spirit or Word, was to incarnate Himself in her womb.” 2 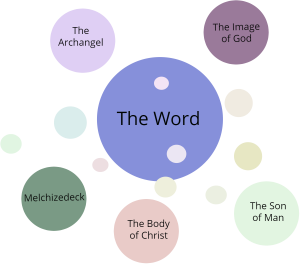 This idea was explained to us in the first chapter of Revelation, where the Apostle John saw the Spirit of Christ appear and speak as “the Son of Man,” as the image of the invisible God (the Ancient of Days), as the Archangel WHO IS LIKE GOD, and as the Sanctified Body of Christ of end days (The Rider on the White Horse).

How was this original understanding of the Spirit of Christ lost?

There are also significant verses that have been changed by translators who believe in the Trinity. For example, God’s introduction of Himself as “I WILL BE WHO I WILL BE” in Exodus 3:14 was changed to “I AM WHO I AM.”

But perhaps the most significant verse that translators changed is John 1:1, which reads,

The Word was the Spirit who was first called “the Word” in Genesis 15:1. John’s meaning of “the Word” was clearly understood by the Jewish people, before Christ was born.

In the beginning, God, or rather “ELOHIM” in Genesis 1:1, was Jesus Christ. ELOHIM is the plural form of God in Hebrew. Christ became an ELOHIM, because when one God (EL) speaks for another, there are two Gods who speak.

Jesus imitated the greatest commandment when He said, “I and the Father are one” (John 10:30). “YHVH our ELOHIM (I), YHVH (the Father), ECHAD (are one)” (Deuteronomy 6:4).  In His defense, He told us that the word ELOHIM, in the Hebrew language, does not refer only to the Father, because even the Sons of God are called ELOHIM.

The Spirit of Christ was the “only begotten God” who appeared as the image of the invisible God and His speaker. He was the Word. He appeared as “the Messenger” or “Angel of YHVH” to Jacob and He named Jacob “Israel.” Jacob called the Messenger of God, his God, saying, “the God who has fed me all my life long to this day, the Angel who has redeemed me from all evil” (Genesis 48:15–16).

The Spirit of Christ was the Angel, or ELOHIM, who appeared to Moses at the burning bush. He was YHVH (He WILL BE) ELOHIM, whom God called “the ELOHIM of Jacob” (Israel). He was Israel’s promised Redeemer, of whom God said, “I will save them by YHVH their ELOHIM” (Hosea 1:7).

The Spirit of Christ was “manifest in the flesh” when He WILL BE became “I AM.” The man Jesus Christ became God’s only begotten Son when He was resurrected as the firstborn from the dead, “as it is written in second Psalm, You are My Son, Today I have begotten You” (Acts 13:33). Because Jesus Christ was obedient, even to the cross, He was made our Lord. And when all things are made subject to Him, then He will be made subject to God, that God may be all in all (1 Corinthians 15:28).

If anyone worships the beast and his image, and receives a mark on his forehead or on his hand, he also will drink of the wine of the wrath of God... Revelation 14:9-10
简体中文 繁體中文