The Most High God is the one true God

The Most High God is the “invisible God”—who Jesus called “the one true God.” He has never been seen by anyone. He has been called the God who resides in the heavens, and above the clouds.

Paul described God this way: “Who alone has immortality, dwelling in unapproachable light, whom no man has seen or can see, to whom be honor and everlasting power” (1 Timothy 6:16).

The expression “Most High God” is used only about 70 times in the Old Testament, as compared to more than 6,000 uses of the expression “Yihvah.”

Daniel called God the “Most High,” when he said to Nebuchadnezzar, “the Most High rules in the kingdom of men, and giveth it to whomsoever He will” (Daniel 4:17). In Daniel 7, we learn that after the saints have overcome the Roman Empire and the Beast, “the saints of the Most High shall receive the kingdom, and possess the kingdom forever, even for ever and ever” (Daniel 7:27). Daniel was speaking of the last day when the “invisible God” will become the God of all the earth.

The Yihvah in the Heavens

The invisible God is the One “in the heavens” in Genesis 19.

In this story, Yihvah ELOHIM appeared as a man to Abraham, and told him of His intention to destroy Sodom and Gomorrah.

But then in Genesis 19:24, we discover there are two Yihvahs:

Then Yihvah rained brimstone and fire on Sodom and Gomorrah,
from Yihvah out of the heavens.

The first Yihvah is the ELOHIM who appeared to Abraham.

The second Yihvah is the invisible God, who resides in “the heavens.”

The Jerusalem Targum reads, “And the Word of the Lord caused to descend upon the people of Sodom and Gomorrah, brimstone and fire from the Lord out of heaven.”

The invisible God told us that He was the Yihvah in heaven, through the prophet Amos.

Notice in this verse that God called Christ “ELOHIM.” This is repeated in Jeremiah 50:40, “As ELOHIM overthrew Sodom and Gomorrah and their neighbours, says Yihvah.”

The Yihvah who is above the Clouds

Isaiah described Satan’s desire to be like the Most High, “above the clouds.”

For you have said in your heart:

“I will ascend into heaven,
I will exalt my throne above the stars of God;
I will also sit on the mount of the congregation
On the farthest sides of the north;
I will ascend above the heights of the clouds,
I will be like the Most High.”

God does not really live above the clouds. But this metaphor describes the unseen God. The Spirit of Christ, the image of the invisible God, is the God who is seen. The one true God is “in all and through all and in you all” (Ephesians 4:6). He is truly omnipresent. But the Spirit of Christ is only present where it goes.

No one has seen God at any time

For Christians, the strongest evidence that the ELOHIM who “appeared” to men was Christ, is John’s message: “No one has seen God at any time. The only begotten God, who is in the bosom of the Father, He has declared Him.”

After the Angel of Yihvah was named Yihvah at the burning bush, He said to Moses, “I, Yihvah, appeared to Abraham, and Isaac, and Jacob as ‘God Almighty’ but by My Name Yihvah, I was not known to them” (Exodus 6:3). Through this statement, Christ told Moses that He was the image of the invisible God, from the beginning. We will discuss this in more detail in Chapter 7.

The appearances to Abraham, Isaac, and Jacob were relatively undescribed. But there are very vivid examples of Yihvah revealing Himself with a human image: walking in the garden with Adam (Genesis 3:8), appearing as a man to Abram (Genesis 18:1); showing Moses His back (Exodus 33:23), and sitting before the 70 elders (Exodus 24:9–11).

Melchizedek, the Priest of the Most High God

“You are a high priest forever, according to the order of Melchizedek” (Hebrews 7:17). 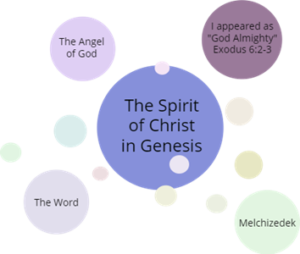 The writer of Hebrews also explained that the Most High God in the Old Testament was not Christ. He said that Christ was Melchizedek who appeared to Abraham, as the priest for the Most High God.

“For this Melchizedek, king of Salem, priest of the Most High God, who met Abraham returning from the slaughter of the kings and blessed him, to whom also Abraham gave a tenth part of all, first being translated ‘king of righteousness,’ and then also king of Salem, meaning ‘king of peace,’ without father, without mother, without genealogy, having neither beginning of days nor end of life, but made like the Son of God, remains a priest continually” (Hebrews 7:1–3).

The writer of Hebrews said that Melchizedek was “without genealogy . . . without beginning of days,” meaning that He was an Angel, the Spirit of Christ. In Chapter 7, verse 17, he wrote, “You are a high priest forever, according to the order of Melchizedek.”

From the beginning of creation, Jesus Christ was the mediator between God and man.

Our prayers must go through Christ, to come to God. No one can come to God, except through Christ. Paul, in his prayer for the Romans, said, “First, I thank God, through Jesus Christ, for all of you” (Romans 1:8).

The only begotten God and the one true God

In the Gospel of John, the expressions “one true God” and “only begotten God” differentiate Christ from the one true God, the Father.

Praying to the Father, Jesus said, “This is eternal life that they may know You the one true God, and Jesus Christ whom You have sent” (John 17:3).