The Angel of God Guides John through Revelation

In the first verse of Revelation, John told us that he was led by the Angel of God to write the Book of Revelation: “The Revelation of Jesus Christ, which God gave Him to show His servants, and . . . (God) signified by His Angel τοῦ ἀγγέλου αὐτοῦ.”

There is a long separation of the subject (God) and object (Angel) in Revelation 1:1, but this phrase is repeated very clearly in Revelation 22:6:

Then he said to me, “These words are faithful and true.” And the Lord God of the holy prophets sent His Angel τὸν ἄγγελον αὐτοῦ to show His servants the things which must shortly take place.

What confuses most people is the different visual appearances of the Messenger who guides John throughout this Book. And, of course, John himself never identifies the Angel. John, beginning in verse 11, was told to “write down what you see.” John never interprets what he sees. This is left to the reader. That is the mystery of the Book of Revelation.

We must remember that the Messenger of God, as in the Old Testament, was only a “manifestation” of the Spirit of Christ. He only appears as a Messenger for our benefit. He has no real physical appearance. He can appear in whatever form he likes. This is quite obvious in the first appearance of the Messenger, described in Revelation 1:12–16. The Angel appears as the Son of Man, and the Archangel, and the Ancient of Days, and the Body of Christ, all at the same time!

Were the different-looking Angels who guided John, throughout the Book of Revelation, manifestations of the Spirit of Christ as the Angel of God? We should expect they are, because we were told three times, that this was the case.

John was guided by the Angel of Yihvah; He just appeared in many different forms. The different appearances of the Angel is very useful to break the Book of Revelation into its components, as we will see.

Each of the manifestations of the Spirit of Christ brings us one or more “revelations about God.” That is one reason why the Book of Revelation is called “the Revelation of God.”

The identification of the three Angels as the Spirit of Christ

Through the Revelation story, there appears to be three different Angels that direct John.

But with the clues John gives us, we find out that these Angels are always the Spirit of Christ.

The first Messenger appeared to John in “the LORD’s Day,” in all the imagery of the Spirit of Christ of the LORD’s Day.

The Spirit of Christ as the Word 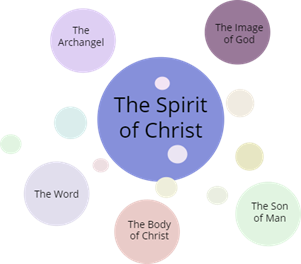 The Spirit of Christ speaks as God again, in verses 17-18, saying, “I am the First and the Last, and the living one, and I was dead…”

Does this mean that Jesus Christ is God?

The expression “First and the Last, besides Me there is no God” goes back to the identification of the Spirit of Christ as the Word in Isaiah 44:6. Jesus Christ is the Word, the speaker for the invisible God. Throughout the Book of Revelation, we will find that He speaks from four identities: as the Angel, as the Word, as the Body of Christ, and as the man Jesus Christ. His identity may even change within a sentence, just as it did in the Old Testament.

The Spirit of Christ as the Archangel

As the Archangel, or ruler of the Angels, He holds the seven Angels of the seven churches in His right hand, in verse 20. The right hand represents one’s power. The identification of the Spirit of Christ, the Angel of Yihvah as the Archangel, came to us in Zechariah 1:10, 3:9, and 4:10.

The Spirit of Christ as the Son of Man

The Spirt of Christ as the Ancient of Days

In the Old Testament, the Spirit of Christ was the image of the invisible God. John told us that His head and hair were “white like wool” (v. 14). This is the appearance of the Ancient of Days in Daniel 7:9. Again here, we really understand the concept of “manifest in the flesh,” for Christ appears as both the Son of Man and the Ancient of Days, the appearances of the Spirit of Christ we first saw in Daniel, and now again in Revelation.

The Spirit as the Redeemed Body of Christ, the Elect

Then John told us, “His eyes were like fire. His feet like fine brass … and His voice as the sound of many waters” (Revelation 1:14-15). This is the image of the end days redeemed Body of Christ, the elect, mentioned in Daniel 10, Ezekiel 43, and Revelation 19. This understanding of the Spirit of Christ as the Body of Christ (one Body and one Spirit) can be seen vividly also in the Shepherd of Hermas of 130: “the Spirit that spoke with you in the form of a Church.”1 It is clear that the Rider on the White Horse is the Spirit of Christ as “the Body of Christ” in Revelation 14:20. For we see the “Son of Man” in the clouds in verse 14.

The second Angel, or messenger, was described in Revelation 10:1: “I saw still another mighty angel coming down from heaven, clothed with a cloud. And the rainbow was on his head, his face was like the sun, and his feet like pillars of fire.”

All of these clues point to the identity of the Angel as the Spirit of Christ.

But there is one more interesting clue that tells us this Angel was WHO IS LIKE GOD, the Angel Daniel saw in his vision of Daniel 10:5, a “man dressed in linen.”

Then I heard the man clothed in linen, who was above the waters of the river, when he held up his right hand and his left hand to heaven, and swore by Him who lives forever, that it shall be for a time, times, and half a time; and when the power of the holy people has been completely shattered, all these things shall be finished.

The story of time, times and half a time is the story the Angel revealed in Revelation 11–13.

The final verse of Revelation 10 is also revealing. First John heard “a voice from heaven” and then the Angel spoke to him. In the last verse, we read that “they” spoke to him, saying, “You must prophesy again . . .”

How is it that “they spoke to him?” It seems that the Spirit of Christ was speaking as the Word from heaven and through the Angel at the same time.

We’ll need to assume that the Angel who showed John the “judgment of the Great Harlot” was the same Angel that showed him New Jerusalem. These were both described as “one of the seven angels who had the seven bowls of wrath (seven plagues).” In Revelation 1:1, 22:6, and 22:16, we are told that one Angel guided John throughout this story, so the assumption seems fair.

These seven Angels, with the seven plagues, all wore a “golden sash” (Revelation 15:6) as did the Angel of Yihvah in Revelation 1:13.

There is no real need to look for clues this time because this Angel will directly reveal Himself as Christ. But which of the seven Angels was it? In fact, they may all have been manifestations of the Spirit of Christ. But if we had to pick one, we would pick the seventh Angel with the seventh bowl.

In Revelation 16:17, the seventh Angel poured out His bowl on the air, and a loud voice came from the throne saying, “It is done.” This “loud voice” is the voice of the Archangel, and the words “it is done” are the words of the invisible God in Revelation 21:6. We can assume that the expression “poured His bowl on the air” is only representational of the Angel’s sounding of a loud voice.

It must be this seventh Angel, the last Angel, who appears to guide John in Revelation 21:9, after saying, “it is done,” in verse 6.

The first evidence that this third Angel, “one of the Angels with the seven bowls of wrath,” was the Angel of Yihvah, is found in Revelation 21:15, “the one who spoke to me had a golden measuring rod.” This goes back to Ezekiel 40:3, the bronze man, who measured the temple. He was called Yihvah in Ezekiel 44:2 and 5; and also appeared in bronze in Daniel 10:6, as the Archangel “WHO IS LIKE GOD.”

This third, and last Angel of the Book of Revelation, told us directly that He was the Christ.

He spoke the words of Christ in Revelation 22:6–9:

Then he said to me, “These words are faithful and true. And the Lord God of the holy prophets sent His angel to show His servants the things which must shortly take place. Behold, I am coming quickly! Blessed is he who keeps the words of the prophecy of this book.”

Now I, John, saw and heard these things. And when I heard and saw, I fell down to worship before the feet of the angel who showed me these things.

Then he said to me, “See that you do not do that. For I am your fellow servant, and of your brethren the prophets, and of those who keep the words of this book. Worship God.”

Hearing the Angel speak the words of Christ, John fell at His feet to worship Him.

John said, “I, John, saw and heard these things,” to explain to us why he worshiped this Angel. Of course, John knows he should not worship Angels (Deuteronomy 4:4; Colossians 2:8). But this Angel spoke the words of Christ, and after hearing the Angel speak as Christ, John fell down to worship Him.

In reply, the Spirit of Christ told John that He was his fellow servant. This was the attitude of the Spirit of Christ from the beginning, “Ὃς Who emptied Himself taking on the form of a bond servant”(Philippians 2:7). When He came into this world, He said, “I am among you as One who serves,” and told us that He who wishes to be the greatest in the kingdom of heaven must be the servant of all (Luke 22:26–27).

Then the Spirit of Christ told John that He was his brother. Of course, no Angel could say this.

Then, the Spirit of Christ told John not to worship Him, “worship God!” (Revelation 22:9). When we have resurrected in the Lord’s Day, we will no longer worship Christ, as He will no longer be our Lord. Rather, He will become as our brother. This was Christ’s message in the final Chapter of Revelation.

The expression, “Bright and Morning Star,” means that He is the brightest of the Angels.

Satan was originally called “star of the morning”—meaning the brightest star. But he wanted to ascend as high as God, as we are told in Isaiah 14:13: “but you said in your heart, I will ascend to heaven, I will raise my throne above the stars (angels) of God.”

Satan’s desire to be raised above the angels was cut down by Christ.